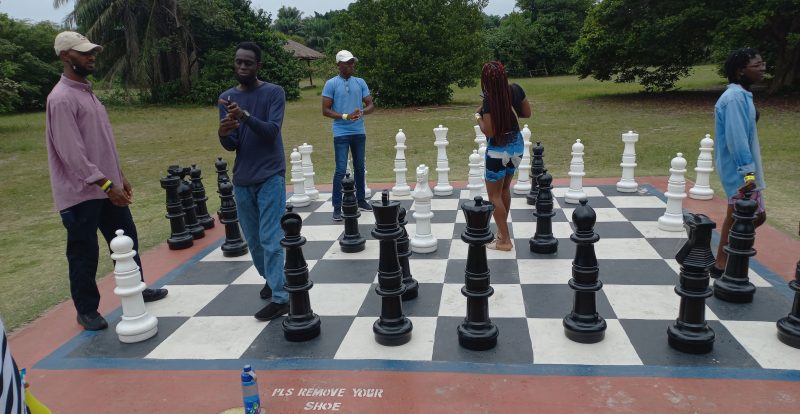 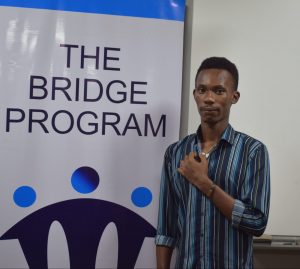 “I had walked in that day with one constant thought in my head, “How’s this program valued at $1,000 and yet, I’m attending this for free?”. You know that saying, “If you’re not paying for the product, then you’re the product”

Martins Obinna Charles is an undergraduate student at The University of Lagos, studying toward a Bsc degree in Pharmacology, Toxicology, and Therapeutics. He has great interests in medicinal chemistry and Big Data in the Health industry. Following the footsteps of Nobel Laureate, Muhammad Yunus, his career vision is centered around solving Healthcare problems plaguing the impoverished global communities. Currently, he serves as; the Deputy Senate President, Senate-house – Association of Pharmacology students, the University of Lagos; founder of readie readie (book club on Instagram); and is set to launch ‘Slander University Life’, a podcast and story series about university life, in October 2021.

My Experience At The Bridge Program 2021

For years to come, the image you see above will open up a dam of emotions for me. I’d be damned to not share this amazing story of beautiful people who bridged the gap I felt, with the knowledge I never knew I needed.

I had walked in that day with one constant thought in my head, “How’s this program valued at $1,000 and yet, I’m attending this for free?”. You know that saying, “If you’re not paying for the product, then you’re the product”

I always thought it was an emphasis on fraud or prostitution. But, for the first time, I’ve never been more proud of being a product as I am right now. I saw young people in the reception, much like myself, with wide eyes, masks on. So many bags, like chill out folks! It’s a Bootcamp for 2 weeks, not a vacation.

It was a vacation though, like a breath of fresh air away from a system of decay we called education back in our different universities.

The waves came in steady, waves of knowledge that washed away the ignorance I had; as every conversation sailed, I was reaching shores of unfounded enlightenment that stirred a hunger in me; and even as I type this, that hunger hasn’t waned one bit. 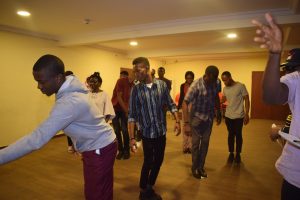 I leaped off that Lily pad and self came crashing down

Experientials were a big part of our learning— simulated situations made to teach you life lessons through experience. You assume you know you, and then you don’t after an experiential.

“In this one, it was the impatience for me”

You’d think, how hard is it to place little pads in front of you till you got across the room, with all the smart brains here?! Well, we kinda failed. Only then did I realize a very useful lesson. Self-awareness beyond consideration of others is no awareness. We always need each other. Like a circle of self-aware people who could see the goal as clearly as you did. And even if this was a leadership test, I saw what I needed. That circle! I always knew this but not in this kind of ingrained manner.

In the days to come, my sense of self grew. More experientials, and there I was one night subtly wondering If I was a psychopath when I had been given the chance to free others, and did not think to do that — Mr. John cried, and I understood it was more than just a game. Each time we went from one experiential to another, I saw the world clearly, saw where I fit in and how much influence I had or could wield. 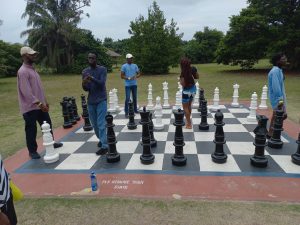 If you always ever imagined the world as black or white, checkmate, you were wrong!

One scene that comes to mind is an EL session on Loan aids and their impact on Africa, the argument between Jeffery Sachs and Dambisa Moyo.

EL sessions were my favorite part of the program, the learning experience in these classes was mind-stretching. It’s easy to fall into the rabbit hole of one perspective, especially when you’re used to being regarded as smart — the danger of a single story as Chimamanda called it.

But here I was drawn between two ends, finding all shades of right, a little bit here with Jeffery and another bit there with Moyo. And my house members kept rolling out new perspectives that upset the rabbit hole and turned it into the vast trench of opinions. In that spread, depth was made. 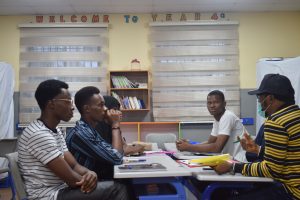 I don’t know about families that pray, but a circle that storms together, play together.

I had walked into the camp on Saturday the 14th of August, thinking to myself how Intense this would be, a camp filled with bright minds talking about leadership. Burst your brain! I had fun! So much fun that on several days we went from teasing to learning, back to teasing. Don’t mind all the seriousness in the picture above. After each class, we were back to being COMRADES, some days like the ones below. Drawing boats, killing bad guys, and saving the world!

Then Came A Conflict 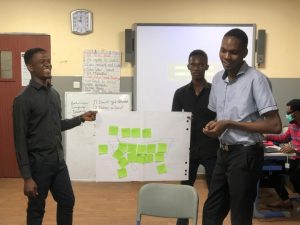 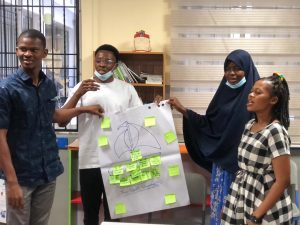 The wars we fight either against each other or against ourselves are small victories that cement a certain future.

“If there’s one way not to present, it’s this”.

That was Mr. John’s feedback on the night before our ideas festival, we had practiced our presentation in front of him before the big day. We were so comfortable we had forgotten what we were fighting for. So we got complacent and walked up that stage to make a show of nothing. We got back in class and for the first time had our heated argument, the tension was high.

“In all that fight, I noticed the maturity that I don’t see at motor parks or with average people (no, we didn’t use the SBI model. *Chuckles*)”

But we were conscious enough to understand what had happened, express what we had to say without invalidating anyone’s opinions, that was TBP rubbing off on us. I could feel it, the energy that night was mad, the zeal was fire and the very next day at the ideas festival, even if I was kind of fidgety, the support we all had for each other was there! We nailed it! Joseph from Evolve Credit was pleased! 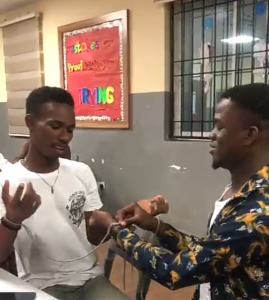 Obudu was the best house ever—yup, each of our houses had amazing names, ours was the best though! In this picture my energy was here: 👍.

That was my energy level when I got every opportunity to bond with these guys; when we traded ideas; when they spoke about their works and projects. Like, we had a whole ass chairman on our team, and possibly the next Elon musk: Arinze in the picture above!

Before I came to TBP, I had written this: https://link.medium.com/eSrswiYsbjb . And by the time I left there, I had a leadership map in place, a frame of who I wanted to be in HD, no, 4k! I’d always felt out of place like I was doing too much with trying to be proactive with who I want to be. At TBP, Mr. John, Mr. O. and these 8 people: Arinze, Tobe, Tobi, Tamilore, Kofo, Ghaniyat, Omoniyi Fasasi (love that name, man!) and Sultan, were all the support and network I needed for a new me! Even if we were all leaders in our own right! These two leaders stand out! Mr. Onoja: far-right; Mr. John: far left.

All the beautiful people in the camp, including Tammy in the picture, wedged between their guidance and support had the best impact on their lives. There’s a reason they are called Educators, and educate, did they! 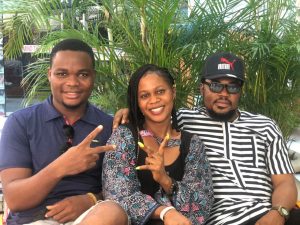 Smiles reach the eyes when we pose for selfies with better versions of ourselves.

Alright! Said much! But I want to add this last picture real quick! See the team in a selfie on our first startup visit with Evolve Credit. It wasn’t just some summer Bootcamp where they talked a lot, we did the work, however stressful, and that, my friends, was how I found myself in a circle that not only supports you. but influences you to be the best you there can ever be.

I have no regrets, except leaving for school at the end of this amazing program. I hope to be back here to tell a bigger story, a story of me as the TBP fellow that impacted the world! 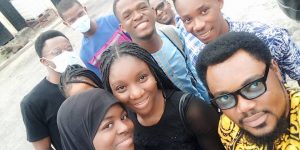 The End. For Now!